Just Cause 3 is looking absolutely amazing so far, and we haven’t even seen the new Rico in action! but the sad news we have received about Just Cause 3, is that there will be no multiplayer. With no multiplayer in the game this does mean the developers have to make the story gameplay as fun as they possibly can so that this game does not die quick. I would imagine we will receive DLC’s etc, BUT there something I have been thinking about that i feel could make the gameplay experience a lot more fun than it already looks, and this is a FPS (First Person) mode in Just Cause 3!

To me this feature is something unique and rare in games like this, and with all the chaos that Just Cause 3 will allow us to cause, experiencing all of this in first person would make it so much more fun. Imagine grappling your way from one building to another in the first person mode, or flying military jets doing barrel rolls in mid air. All of this would just be CRAZY!

Red Dead Redemption 2 is a highly anticipated game. With no official confirmation about the game coming soon or in development from RockstarGames them selves, this does not mean leaks wont occur. Yep, you read that right even though there is no confirmation from the developers themselves, someone has still managed to leak some info. A NeoGaf user who goes by the name Shinobi has made a new statement, stating that he has supposedly spoken to people behind the making of the original Red Dead Redemption, and that it is safe to say a sequel is definitely in the makings.

He continues to say in his statement, that the game will be releasing this year in 2015 November. THAT IS 9 MONTHS AWAY. However, the sad news to all of this is that we don’t even know if this user is faking all of this for attention of if he is actually telling the truth.

Now, the GOOD news is, Take Two have teased us by promising new ”exciting” titles from popular franchises to be announced this year. So, could this mean Red Dead 2? I don’t know, its best not to get on our high horses… because this could be a tease for a completely different game such as; Bully, LA Noire or even Midnight Club. Watch the full video below to find out some more in depth details on what Take-Two had to say

BULLY GETS A HD REMAKE!

Bully was a great game and loads of people enjoyed it. After almost 9 years of the game being released we have got a HD Remake of the game and it looks awesome! This just shows what Rockstar could do with Bully 2 in terms of graphics. Watch the video below for more details & watch the HD remake video for yourselves.

2 Days ago new gamplay details and screenshots were leaked by a German magazine. Somebody leaked the PDF version of this magazine which is meant to be released supposedly to everyone tomorrow (Wednesday 4th Febuary) The PDF version that was used to leak the screenshots and gameplay details is at the moment only available to people who have a paid subscription.

These screenshots were just absolutely mind-blowing it showed just how much has changed from Just Cause 2 to Just Cause 3. But out of the 10 screenshots, there were two specific ones that people have been talking about the most. People have suggested that these ”tease” the Co-Op mode in this game. At first i thought it was just a screenshot taken from the story mode, but after taking a look at both of them more in depth it does seem it may be Co-Op.

MULTIPLAYER WILL NOT BE IN THIS GAME which has been confirmed but co-op…well that’s just a different story, Watch the full video below to find out how this may be the ultimate tease yet… (besides the trailer) 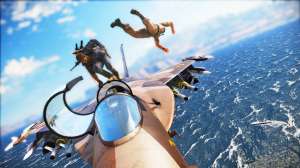